In the 18th and 19th centuries, Irish Catholic children attended school to learn English and arithmetic. In densely populated areas, school might be held in an abandoned barn or building, but in the country, the children literally sat in front of the hedgerows that separated one small croft from another. 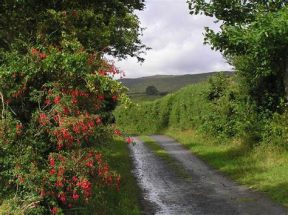 Hedgerows along a modern lane

There were few, if any, textbooks. Some would have rudimentary pieces of slate and chalk to pass around, but many children had to memorize their lessons. Their teachers were usually priests who would often offer lessons in Catholicism as well. But teaching the Catechism was considered treason, and getting caught meant punishment — anything up to and including death.

So on a sunny summer afternoon, it was not unusual to see a priest walking up and down on the edge of a field for an hour or so, his hands waving, his mouth working, extolling the tenets of Catholicism to children who were hidden from sight.

In the 1830s, the English overlords came to realize that an illiterate Irish population was of little value, and some standardization of school lessons began. It was not until the 1860s, though, that actual schoolhouses became a prominent feature of Irish villages.

2 thoughts on “Tuesday Trivia: The Hedgerow Schools of Ireland”