Once again, I’m coming in just under the wire for NWW’s photo prompt from August 15. As before, I’ve created a scene that will be used in my Donovan Family Saga. Enjoy! 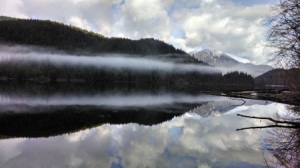 When morning came, Adam sat and watched the sun rise over the canyon walls. One moment, the shadows were deep in the darkling dawn – the next and the sun had burst over the rim, covering everything in a warm golden haze. The canyon sunrise is like life: you jump from dark to light in an instant, and sometimes you’re caught unprepared.

He had spent most of the night pacing along the banks of the brook. He’d built a small fire when the night air became damp and chilly, and spread his bedroll out on the soft ground. But he nodded off infrequently and for short periods during the remainder of the night. When dawn began to break, he roused himself, made coffee and rolled a cigarette, then sat against a tree smoking as the sky turned suddenly blue.

There were biscuits and jerky in his saddlebags, but he wasn’t hungry. He forced himself up, finished his coffee, and buried his cigarette along with the fire. The sun was already hot – too hot for April. He walked to the edge of the brook and inspected it closely. Clear and a few feet deep, it ran swiftly with the melting snow off the mountains. He bent to taste it: colorless, odorless and icy. He splashed it over his face and neck, wondering if it were the only water on this ranch.

He’d ridden deeper into the canyon last night, away from the cabin and the girl who was so much on his mind. He decided to follow the brook further west to get the lay of her land. Thinking the walk might clear his head, he left the horse behind. He stopped from time to time to smoke, and took notice of the prints of many animals: deer, fox, raccoon, and once the spoor of a big cat. Cougar or mountain lion, he supposed, then realized that he had seen no cattle.

He had walked about a mile when he noticed that the brook seemed to be running more swiftly. From the distance he could hear the sounds of falling water. He increased his pace and came upon a beaver dam and a rippling waterfall that he judged to be some eight feet tall.

He’d been on an incline for some time, and it was quite steep here. There were terraces and ledges between him and the brook, but he climbed them easily. At the top he stopped in his tracks, awed by the size and beauty of the lake before him. For over four acres it spread, deep and pure in a natural bowl. He gazed in silence for a long minute, then uttered one word,

Like the sunrise, it caught him unprepared. But unlike the breaking morning, this sight soothed him. He slowly sat down on the rocky ledge. It was here that the cattle were – some two hundred of them. Here also the deer whose tracks he had seen, and even a small band of mustangs that had come down from the mountains to drink. Here the air was cool and clear, and the blue of the sky was reflected in the calm waters.

This Arizona. This land of surprises. What a wonderful place!

He wondered why the girl had never mentioned it. Could it be she didn’t know? How far from the cabin could she have gone with her father so sick these past years? That dam, if he was right, was only a few years old.

It was a sizable inheritance. This lake and those cattle would put the ranch on a prosperous footing again. He jumped from terrace to terrace, hurried back along the trail, his singular purpose to surprise her. Then he stopped in his tracks. What if she wanted to leave this place and all its associated misery behind?

Thoughtfully, he saddled his horse and mounted, turned toward the cabin. He’d just have to convince her to stay.