Anyone who’s a fan of the Old West is familiar with the Colt .45 and the Buntline Special. Like most old & new revolvers, both of these have a rotating 6-chamber cylinder. But did you know there was also a gun with six rotating barrels?

That’s right. Ethan Allen (no relation to the Revolutionary War hero) & his partner Charles Thurber created the revolving multi-shot pistol in the 1830s and for two decades, it enjoyed much popularity. Known as the pepper-box or pepper-pot for its resemblance to a kitchen pepper grinder, these firearms came in 4, 5, and 6 barrel styles, with barrel lengths available from 3” to 6”. 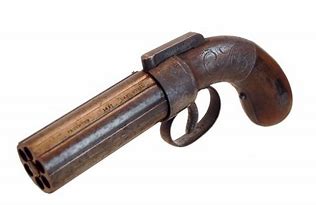 The pepper-pot was not the world’s most reliable pistol. In his book Roughing It (1872), Mark Twain describes his experience with it:

George Bemis was our fellow traveler… He wore in his belt an old original “Allen” revolver, such as irreverent people called a “pepper-box”. Simply drawing the trigger back, cocked and fired the pistol. As the trigger came back, the hammer would begin to rise and the barrel to turn over, and presently down would drop the hammer, and away would speed the ball. To aim along the turning barrel and hit the thing aimed at was a feat which was probably never done with an “Allen” in the world. But George’s was a reliable weapon, nevertheless, because, as one of the stage-drivers afterward said, “If she didn’t get what she went after, she would fetch something else.” And so she did. She went after a deuce of spades nailed against a tree, once, and fetched a mule standing about thirty yards to the left of it. Bemis did not want the mule; but the owner came out with a double-barreled shotgun, and persuaded him to buy it, anyhow. It was a cheerful weapon―the “Allen”. Sometimes all its six barrels would go off at once, and then there was no safe place in all the region round about, but behind it.

It’s really no wonder the pepper-pot pistol was known as “the gun that won the East.”

One thought on “Western Trivia: The Wackiest Gun In The West”

Subscribe & get a free copy of one of my books. Send your selection to me via the CONTACT form.